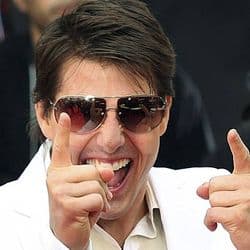 Tom Cruise hired currently imprisoned lawyer Anthony Pellicano to spy on a man who once threatened to expose the actor as gay, according to claims in a new lawsuit:

There is a long history between Cruise and Sapir. In 2001, Cruise sued Sapir for $100 million after Sapir claimed to have video evidence that Cruise 'engaged in a homosexual relationship.' That lawsuit settled later that year. In the settlement, both parties issued a statement saying that no such tape existed.

In the latest suit, filed Friday in L.A. County Superior Court, Sapir claims Pellicano illegally wiretapped his phone during the time the 2001 lawsuit was active.

Sapir claims in the suit that Cruise, Fields and Pellicano were all in cahoots.
Sapir is suing for $5 million, minimum.

Bert Fields tells TMZ, "The allegations are absolute garbage. We did not even hire Pellicano to work on the Sapir case."