Sticking to a promise he made in May, Mormon congressman Jason Chaffetz (R-UT) promised to do everything he could to block the D.C. Marriage Equality bill from becoming law. Congress has 30 days to take action against it. 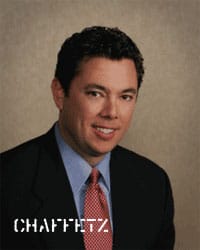 "Chaffetz acknowledged it will be tough to overturn the newly adopted ordinance, which the Washington mayor is expected to sign before Christmas. 'It's going to be exceptionally difficult because Democrats have us outnumbered by large amounts,' Chaffetz said Tuesday. 'Nevertheless, we're going to try.'

Chaffetz sits on a House subcommittee that oversees the district. Congress can revoke D.C. laws within 30 days after they are signed by the mayor.

Chaffetz promises to introduce legislation in January. 'If it were put up for a vote, traditional marriage would win,' he said. 'It would win with a congressional vote, and it would win with the residents of Washington, D.C.'"

Said Chaffetz last May: "Some things are worth fighting for, and this is one of them. It's not something I can let go softly into the night. . . . I
recognize the Democrats are in the majority, but I represent the
majority of Americans on this issue."