Barney Frank says it doesn't matter what the Pentagon includes in its budget recommendations regarding 'Don't Ask, Don't Tell'. 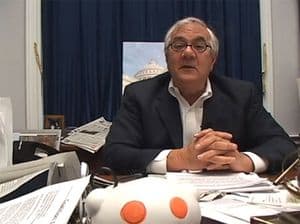 "Some strategists have suggested that repeal stands a better chance if the Defense Department includes the policy change in its budget recommendations, which would in turn make it more likely that the House and Senate Armed Services Committees would fold it into the fiscal year 2011 Defense authorization bill.

Frank countered, 'People should not be worried about whether it’s done in committee or not. That is a procedural detail that will have no effect on the final outcome.'

Frank noted that a floor vote on repeal would take place either way — whether or not the Armed Services Committees vote to incorporate an end to the policy in their FY 2011 Defense bill.' If the committee puts it in, there will be a vote to knock it down. If the committee doesn’t put it in, there will be a vote to add it. In both cases, I am confident that we will have the votes on the floor to pass it,' he said of a vote in the House. 'In fact, my recommendation would be if there’s any difficulty, not to waste efforts trying to get it in committee, but to add it as an amendment on the floor.'”

Frank says the more important question is whether there will be 60 votes in the Senate.