A judge has rejected the lawsuit brought by Bishop Harry Jackson and the Stand4Marriage coalition against the D.C. election board. Plaintiffs hoped to force a voter referendum on the recently approved marriage equality law: 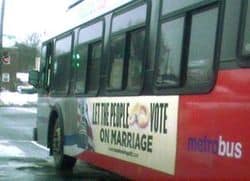 "Plaintiffs led by a Maryland pastor, Bishop Harry Jackson, sued after the Board of Elections and Ethics refused to put their initiative on the ballot. The measure would have defined marriage as between a man and a woman. The board ruled it violated the city's Human Rights Act.

D.C. Superior Court Judge Judith N. Macaluso ruled Thursday in favor of the city. She said the board's action was justified because the initiative would in effect authorize discrimination."

You may recall that 39 GOP congressmen filed an amicus brief in support of the suit.