More goodness from The Onion:

According to Faber, his first experience with evangelical Christianity was not all that different from other gays his age. 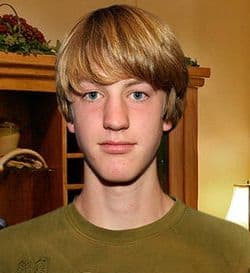 "Sure, I looked at the Book of Leviticus once or twice—everybody
has," Faber said. "We all experiment a little bit with that stuff when
we're growing up. But I was just a kid. I didn't think it meant
anything."

Faber's instinct was to deny these early emotions. But recently, the
Louisville teen admitted, the feelings have grown stronger, making him
wonder more and more what life as a born-again right-wing
fundamentalist would be like.

"The other week, I was this close to picketing in front of an
abortion clinic," the mortified teenager said, his eyes welling up with
tears. "I know it's wrong, but I wanted so badly to do it anyway. I
even made one of those signs with photos of dead fetuses and hid it in
my closet. I felt so ashamed, yet, at the same time, it was all
strangely titillating."

Faber's parents, although concerned, said they're convinced their
otherwise typical gay son is merely going through a conservative
Christian phase.

"I caught him watching The 700 Club once when he thought he was alone in the house, and last week, I found some paperbacks from the Left Behind
series hidden in his sock drawer," his mother, Eileen Faber, said. "I'm
sure he'll grow out of it, but even if he doesn't, I will love and
accept my son no matter what."

Faber's father was far less tolerant in his comments.

"No son of mine is going to try to get
intelligent design into school textbooks," Geoffrey Faber said. "And I
absolutely refuse to pay his tuition if he decides to go to one of
those colleges like Oral Roberts University where they're just going to
fill his head with a lot of crazy conservative ideas."

He added, "I just want my normal gay son back."