Michael Ausiello at Entertainment Weekly has a lot of news on what's coming for Glee. 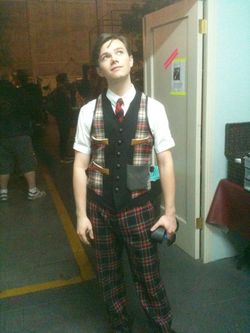 Neil Patrick Harris is likely to guest star on Joss Whedon-directed episode: "Anyway, Harris wants to do it, and Glee creator Ryan Murphy sure as hell wants him to — he’s creating a role especially for the How I Met Your Mother
scene-stealer. And yes, the part includes a little song-’n'-dance. In
fact, the gig not only would reunite Harris with Whedon, it’d also
reteam him with Zachary Woodlee, who choreographed the musical number
in HIMYM’s recent 100th episode."

Ausiello also reports that Kurt's getting a boyfriend: “We just announced we’re doing a nationwide search for the season 2
cast, and [a boyfriend for Kurt is] one of the three roles that we’re
adding. And we’re going to make them a power couple. We’re not going to
do the whole hiding in the shadows thing. We’re going to make them
popular, and out and proud and glamorous. Like prom king and king.
We’re doing the opposite of what’s been done.”

Jane Lynch is going to sing "Vogue" in the Madonna episode.

And Jennifer Lopez wants in, says Murphy: "Lopez wants to do the show, so I’m going to meet with her. In the past
couple of months, a lot of people are coming out saying they love the
show… But I don’t want to stunt-cast too much, because I think the
[musical] numbers are already so extravagant.”