International pressure (such as calls from Amnesty International for their unconditional and immediate release) will not persuade the government of Malawi to stop prosecution of a gay couple who were arrested after holding an engagement ceremony, the Washington Post reports: 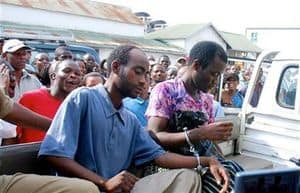 "In a statement Monday, Malawi's Information Minister Leckford Mwanza Thoto made no apology for the laws that criminalize homosexual acts. He said Steven Monjeza and Tiwonge Chimbalanga were 'clearly breaking the laws of Malawi.' … 'As government we cannot interfere in the court process,' Thoto said. 'We depend on our Western friends, yes, but we are a sovereign country.'"

Chimbalanga recently collapsed and became ill in court and was ridiculed by onlookers while he was forced to sweep up his own vomit. The couple has also been subject to additional public harassment.

A verdict is due in the trial next month: "Mauya Msuku, the couple's lawyer, said the laws under which Monjeza and Chimbalanga were charged were archaic and unconstitutional. 'The penal code criminalizes homosexuality or same-sex marriages but under the Bill of Rights in the new Constitution it is clearly stated that no one should be discriminated against on the basis of – among other things – sexual orientation,' he said.