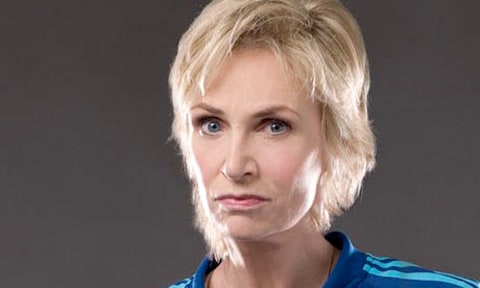 Sue Sylvester calls it like she sees it, and so does Jane Lynch in a new interview with the UK Guardian.

Says Lynch of this year's gay rights battles: "Shouldn't there be safeguards against the majority voting on the rights of a minority? If people voted on civil rights in the 60s, it would have never happened. It took somebody like [President] Lyndon Johnson going, 'F all of you! I'm going to do this.' Obama won't do it. He's a huge disappointment to me."

Lynch also talks about growing up:

"I didn't know what 'gay' was in high school. We used the
word 'queer' when someone was weird – when I finally heard what it
really meant, my heart sank, and I thought, 'Oh God, that's me.'"

And gay actors being out in Hollywood:

"I think if I were an ingénue – if I were Kate Winslet – it probably
would hurt my career, but because I'm Jane Lynch and I'm a character
actor, the world isn't projecting their romantic fantasies on me."