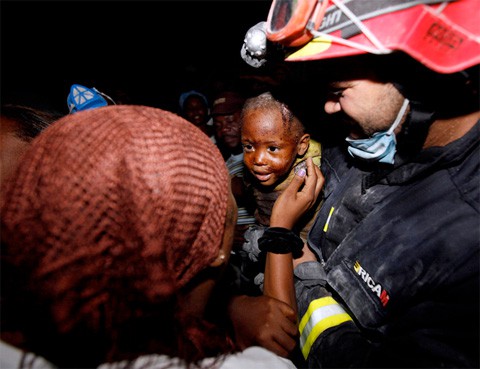 Photo: "Two year old Redjeson Hausteen Claude reacts to his mother Daphnee
Plaisin, after he is rescued from a collapsed home by Belgian and
Spanish rescuers in the aftermath of the powerful earthquake in
Port-au-Prince, Thursday, Jan. 14, 2010."

If you have Haiti on your mind, and thoughts that you could give more if you were confident it would be used efficiently, immediately and for those most in need. We'd like to help.

As part of a volunteer position with the Clinton Foundation a few years ago my team did an assessment of the health care system and some due diligence on what made our two partner health organizations down there able to succeed under the most difficult constraints.

Both GHESKIO  (the Haitian Group for the Study of Kaposi's Sarcoma and Opportunistic Infections) and the Partners in Health organization have done world renowned AIDS work for more than two decades, both are rising to the current challenges and are already in the thick of it. GHESKIO's main clinic is known for its work with the poorest populations in Port-au-Prince (as well as the most stigmatized and threatened, sex workers and homosexuals). Their clinic by the water has quite a bit of damage, but the clear commitment and practicality come through in Dr. Pape's emailed list of priorities posted on their partner site at  Cornell Global Health , where you can also donate and understand more.

You may have heard of Partners in Health. A commenter mentioned it the other day and one of the founders, Paul Farmer, was in a New York Times story this week. A few years ago Tracy Kidder wrote a much discussed New Yorker piece on him and later turned into a book. The group was founded by the at times controversial Farmer and Dr. Jim Yong Kim who went on to lead the World Health Organization. This group's talent and commitment and leadership goes deep, and it's one of those rare places that it seems everyone involved has internalized the mission:

The
PIH Vision: Whatever it takes

At its root, our mission is both medical and moral. It is based
on solidarity, rather than charity alone. When a person in Peru, or Siberia,
or rural Haiti falls ill, PIH uses all of the means at our disposal to
make them well—from pressuring drug manufacturers, to lobbying policy
makers, to providing medical care and social services. Whatever it takes.
Just as we would do if a member of our own family—or we ourselves—were
ill.

PIH has worked in the the poorest section of Haiti, the central plateau, and has provided comprehensive care, ever expanding to hundreds of thousands of families earning on average less than $500 per year in a country where the health budget per person per year works out to something less than $12.  And Partners in Health has done it in some years with a budget in the low seven figures.

And it's not just triage. At one end of the spectrum they pay for schools, and at the other end they've proven that full ARV regimens can be managed by people with AIDS in resource constrained areas — with a higher level of of adherence to the tough drug schedules than in the states.

They have put up a new site to let people know what's going on and the descriptions are harrowing. They have been coordinating medical supplies and care and there has already been an influx of people from the capital to their clinics.

We've set up a Towleroad page on the Partners in Health site with a goal of $20,000, that i hope we blow right by and keep going. We encourage you to give what you can and to give it with the great confidence that it will be put to good use.

Rest assured your donation is supporting high quality care delivered by stars working for nothing close to what they would earn elsewhere and certainly not what they deserve. Work at these clinics comes with something of a vow of poverty and that goes all the way to the top. Their mission is to  serve the poor. Farmer donated his Macarthur grant, I think 15 years ago. They don't even have the professional NGO layers that are required to get US government grants, so they can be assured of "oversight" and such. (though both do get some US AID money as their effectiveness is undeniable.)

Young physicians working down there as part of the Harvard partnership (as well as visitors from international foundations) sleep on cots, without air conditioning, and adhere to the overarching philosophy.

If you can help them now, please do. And stay in touch and keep helping. The 50-500 dollars you have will make a much bigger impact here than with the DNC. It might be counted in lives.

And Tracy Kidder interviewed by, you guessed it, Rachel Maddow.