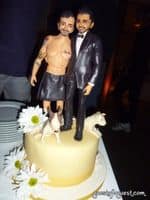 weren't that at all:

"Contrary to some reports, Marc Jacobs and Lorenzo Martone did not get married. Although photos of the designer and his Brazilian boyfriend posing in front of what looked like a wedding cake while on vacation in St. Barts were posted online Monday, Jacobs' rep, Kate Waters, tells Page Six: 'Someone just threw them a party. They're still happily engaged, but not married.' Back in November, Martone told us the couple were planning on getting married, but were just 'waiting for the holidays.'"