The editors of The Observer would like to publicly apologize for the publication of “The Mobile Party” in the Jan. 13 edition. The burden of responsibility ultimately lies on us for allowing it to go to print.

There is no excuse that can be given and nothing that can be said to reverse the damage that has already been done by this egregious error in judgment.

The Observer, though an independent newspaper, is representative of the community of the University of Notre Dame and the values it so cherishes: family, understanding, service, respect and love.

Allowing this cruel and hateful comic a place on our pages disgraced those values and severely hurt members of our Notre Dame family — our classmates, our friends. For this, we sincerely apologize.

Unfortunately, the language of hate is an everyday reality in our society. Earlier this week, surprising comments made by Sen. Harry Reid about President Barack Obama’s accent and skin color were made public and caused uproar. Now, at Notre Dame, a comic strip including hurtful language was printed in this publication, also causing — and rightly so — serious concern. It becomes clear that hurtful language is still present among some circles, and, too often, it’s not until comments like these become public that their true hatred is acknowledged.

The truth is, these comments should not be made at all, and we will not allow our pages to be a forum for such hatred. Publishing commentary that seems to encourage or support hate against fellow human beings is inexcusable.

We must, however more forward, and look to promote instead a culture of acceptance and support for all.

The Office of Student Affairs and the Gender Relations Center, as well as student groups like the Core Council for Gay and Lesbian Students, have worked tirelessly to foster an educated community and an environment of acceptance and love. We would ask that those currently working toward ending discourses of hate on campus continue to do so. We greatly thank you for your tireless effort.

On our part, we must practice more responsible journalism and editing. That this comic was published reveals holes in our editing practices, which are currently being addressed.

In reevaluating our policies, we hope to ensure The Observer will be able to recover from this low point in its almost 50-year history and once again be able to serve the Notre Dame and Saint Mary’s community with the dignity it deserves.

We would like to thank all of those who have called, e-mailed, written and visited our offices this week in outrage.

The content of “The Mobile Party” is in no way representative of the views and opinions of The Observer or the Editorial Board. We hope that as we work together to address this serious issue, we will be able to regain your trust.

We vow to continue to represent the University of Notre Dame and Saint Mary’s College in a way that is respectful and accepting of each member of our community. 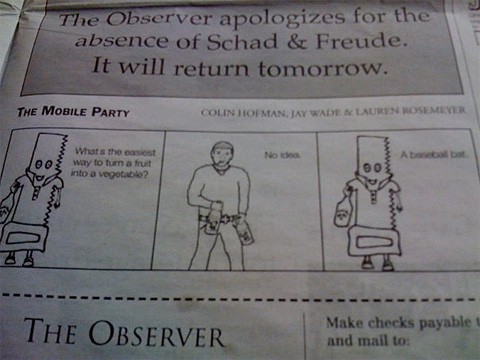 "The cartoon depicted a conversation between two figures. The conversation read, 'What’s the easiest way to turn a fruit into a vegetable?' 'No idea.' 'A baseball bat.'As many people know, 'fruit' is often used as a derogatory term for members of the LGBT community.This type of advocacy of anti-LGBT violence must stop. It isn’t funny. What’s more, it promotes hate crimes, which are all too prevalent in society today.The cartoonist had posted on his blog – though it’s since been removed – his original version of the cartoon. In the original version, it shows that the punchline read, 'AIDS' instead of 'A baseball bat.' The paper, he reported, preferred 'not to make light of fatal diseases.'The Observer made a dangerously misguided decision that promoting violence was somehow superior to making fun of HIV/AIDS. Both versions of the cartoon were abhorrent.GLAAD contacted The Observer immediately upon seeing this cartoon. The Editor in Chief Jenn Metz relayed a tearful and what appeared to be heartfelt apology by phone. She explained that she was not present when the decision to run this cartoon was made, and that she was incredibly upset that others on staff had made that decision."

A retraction and apology are reportedly forthcoming from the paper, and GLAAD has called upon the school's president to issue a statement condemning violence against gay people.

UPDATE: The paper has printed its apology. Read it, AFTER THE JUMP…