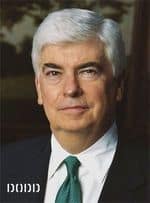 At a press conference on Wednesday evening, Connecticut Senator Chris Dodd is expected to announce that he is not running for reelection, and will retire at the end of his term:

"Word of Dodd's retirement plans comes after months of speculation about his political future, his faltering poll numbers and a growing sense among the Democratic establishment that he could not win a sixth term in the Senate. The news also came on the same day Sen. Byron L. Dorgan (D-N.D.) announced he would not seek reelection.

Dodd's office would not confirm his plans but said Wednesday morning that the senator would make a "major announcement" at noon outside his home in East Haddam, Conn."