Prop 8 supporters appear to have been successful for the moment in shielding broadcast of the federal challenge that begins today in court: 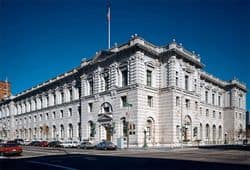 "The high court on Monday said it will not allow video of the trial to
be posted on YouTube.com, even with a delay, until the justices have
more time to consider the issue. It said that Monday's order will be in
place at least until Wednesday. Opponents of the broadcast say they
fear witness testimony might be affected if cameras are present.
Justice Stephen Breyer said he would have allowed cameras while the
court considers the matter."

On Friday, Prop 8 supporters asked Justice Anthony Kennedy for a stay to Judge Vaughn Walker's ruling to broadcast the trial: "They
claim that the plans for cameras would cause witnesses "irreparable
harm," and undermine the chance for a fair trial. They also argue that
the idea of a broadcast — made possible by a recently launched pilot
program — was put into place without the Ninth Circuit Court of
Appeals conducting a full review, including comments from the public."