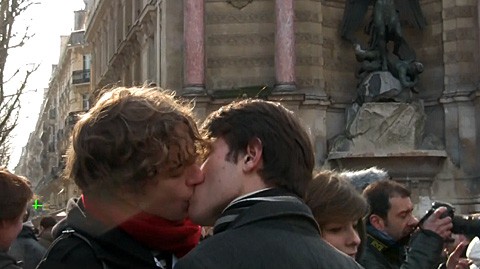 Maxime from Paris writes to us about a Valentine's Day kiss-in held there earlier today:

"The "kiss-in" had originally been planned to take place in front of Notre Dame Cathedral but Christian Fundamentalist websites called in to "defend their faith against this provocation" using 'aids bags', 'sodomites' and other homophobic insults. The websites called for a violent response so the organizers decided to change the location to place Saint Michel in the nearby Latin Quarter, after the police strongly encouraged it, saying they could not protect them in case of trouble. The kiss in was held peacefully at St-Michel but some gays went to Notre Dame anyway and witnesses are saying 200 Christian activists were expecting them, and after they started kissing, they were attacked with motorbike helmets and kicked."

Today's is the latest in a series of kiss-ins (check the other out here, here, and here) in Paris, and participants say the number of those participating in each successive event is growing.

Watch video of today's kiss-in in the Latin Quarter, AFTER THE JUMP…