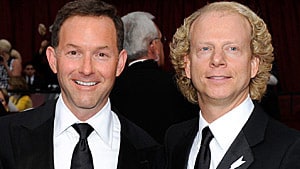 "Jinks and Cohen tell me they have decided to amicably break up their Jinks/Cohen Company. "We've had a great 12 years, but we've both decided that we want to explore on our own," Jinks and Cohen told me. Jinks is forming The Dan Jinks Co and keeping Nick Nantell as VP of development, while Cohen is forming Bruce Cohen Productions.

The duo will continue to work together under their Warner Bros.-based television company, and say they intend to see through several feature projects that include the Catherine Hardwicke-directed Hamlet with Emile Hirsch attached to the Ron Nyswaner script, My Name is Jody Williams, with Audrey Wells directing her script, and the Robin Swicord-scripted The Rivals, a period drama that once had Steven Spielberg attached to direct."

Note: the pair are not romantically involved, just filmmaking partners.