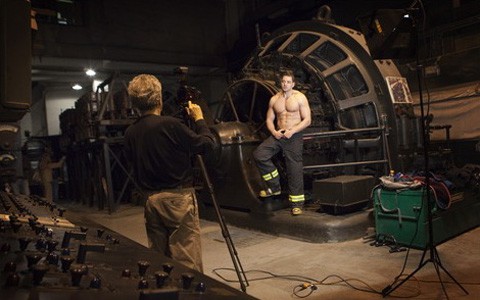 From a NYT City Room column on shooting the annual NYC firefighters calendar:

“This is me out of shape,” said the fireman, Taylor Murphy, as he
flexed an outlandishly large pectoral muscle. He was standing topless,
applying cocoa butter to his 6-foot-5, 265-pound frame, in front of an
enormous turn-of-the-century steel rotary converter.

Nearby, Alan Batt,
who was photographing Mr. Murphy for a charity calendar featuring
beefcake shots of smiling New York City firefighters, fiddled with his
tripod. “I knew this guy was built like, ‘rrruhhhr!’ ” Mr. Batt said,
grunting and making a “this big” gesture with his hands. “So I wanted
him in a place that was rrruhhhr, you know?”

And, uh, I think we're ready for that close-up too…