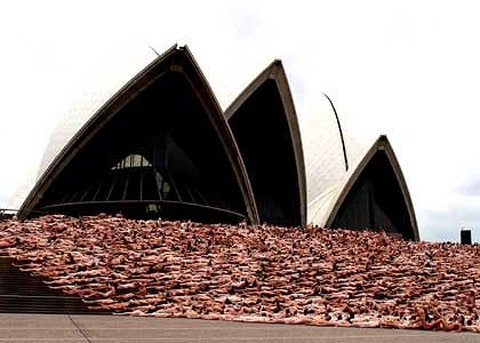 Spencer Tunick attracted thousands to the Sydney Opera House just after dawn on Monday morning to form a nude "base" for the structure, in his latest live photo installation, the Sydney Morning Herald reports:

"More than 5000 people have gathered in front of the Sydney Opera House to be photographed nude in the name of art and diversity today…The artist asked his subjects to pose with their hands by their sides, up high above their heads, and even asked all couples in the crowd to embrace, before moving everyone inside to pose in the theatre.

This is Mr Tunick's first shoot in Australia after visits to the United States, Brazil, France, England and Austria.

The artist said the title of today's installation, Mardi Gras: The Base, referred to the sameness of individuals, regardless of their sexual preferences.

'Gay men and women lay naked next to their straight neighbours and this delivered a very strong message to the world that Australians embrace a free and equal society,' Mr Tunick said."

Getting to that messge wasn't so fluid, however. Added Tunick: "It was difficult to get the straight people to embrace the gay participants … I was happy we got it in the second set-up."

Video (nsfw) at the SMH…