Catholic clergy sexual abuse cases continue to come out of the work, as well as the Vatican's continued efforts to cover them up. The latest case to be revealed is particularly ugly: 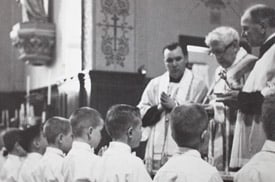 "Top Vatican officials — including the future Pope Benedict XVI — did not defrock a priest who molested as many as 200 deaf boys, even though several American bishops repeatedly warned them that failure to act on the matter could embarrass the church, according to church files newly unearthed as part of a lawsuit. The internal correspondence from bishops in Wisconsin directly to Cardinal Joseph Ratzinger, the future pope, shows that while church officials tussled over whether the priest should be dismissed, their highest priority was protecting the church from scandal. The documents emerge as Pope Benedict is facing other accusations that he and direct subordinates often did not alert civilian authorities or discipline priests involved in sexual abuse when he served as an archbishop in Germany and as the Vatican’s chief doctrinal enforcer."

In recent weeks, hundreds of sexual abuse cover-up cases have surfaced in the German church, so many that the Vatican says it can't handle the workload. And three Brazilian Catholic priests were recently accused of abusing boys in Brazil, with video evidence.

A protest is being held this Sunday in London outside Westminster Cathedral demanding the Pope's resignation over the cover up of sexual abuse by Catholic clergy.