Radcliffe added that he doesn't think his role as Harry Potter would have stopped him from coming out.

"I don't think my position would have stopped me if I was gay. I know that some actors actually don't like to. I kind of can understand that to a certain extent because sometimes you do see actors get typecast after they come out, which is unfortunate. But a lot of the time that doesn't happen. It's personal preference. Coming out is such an important moment in a gay man's life that I would never want to actually comment on whether or not anyone should or should not." 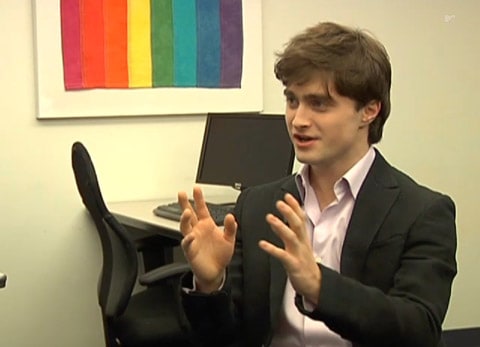 During his recent sit-down with MTV to discuss his work with The Trevor Project, the admirable Daniel Radcliffe fielded a question about his sexual orientation.

Said Radcliffe: My favorite thing I saw was a guy on the Internet that said, 'Of course he's gay. He's got a gay face,' which I thought was kind of an odd thing to say anyway. A 'gay face'? That's a very worrying thing, like they have sat at home and have got pictures of me next to other famous, gay [people] — Elton John, I don't know — just comparing across the years. I'm not sure. It's very, very odd…If people want to say that, they can. But I'm not. I'm straight."