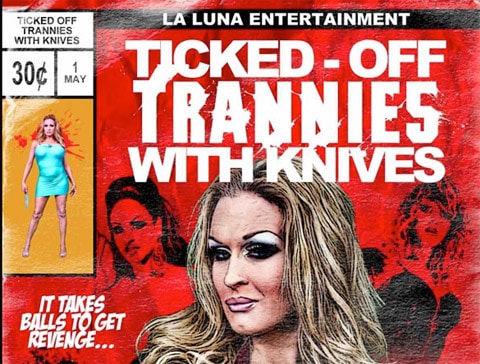 Yesterday in my news round-up I mentioned that GLAAD had sent out an action alert regarding the film Ticked Off Trannies with Knives.

Writes GLAAD in its alert, which demands that Ticked Off Trannies be pulled from the line-up of the Tribeca Film Festival:

"GLAAD has since seen the film in its entirety and can report that the title is far from the only problem with this film. The film, its title and its marketing misrepresent the lives of transgender women and use grotesque, exploitative depictions of violence against transgender women in ways that make light of the horrific brutality they all too often face… By marketing Ticked-Off Trannies with Knives as a “transploitation” film, by using the word “trannies” (a pejorative term for transgender people) in the title of the film, by casting transgender women in some roles, and by citing the murders of Angie Zapata and Jorge Mercado in the trailer, Israel Luna has attempted to place his film squarely within a transgender narrative….[W]hile some of the actors in the film identify as transgender, the characters are written as drag queens, “performing” femininity in a way that is completely artificial. The very names of these over-the-top female caricatures (Emma Grashun, Rachel Slurr, et al.) drive this point home." 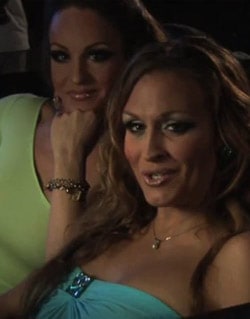 Seth Abramovitch at Movieline calls GLAAD out, accusing the organization of censorship:

"When, exactly, did GLAAD start delineating between what is acceptable or not acceptable humor within the whole Queer spectrum for whom they advocate? According to their logic, drag as a subject is an OK area for broad satire, because it’s 'performing,' but transexualism is not. Well, what if the transexual in question also happens to be a raunchy drag performer, like Dirty Sexy Money star Candis Cayne? Doesn’t the voice of the filmmaker count for something? Are transexuals incapable of laughing at themselves? If you can’t love yourself, how the hell are you gonna love someone else? Can I get an amen up in here?! (And don’t f*ck it up.)And even more importantly — isn’t this, like, censorship?"

The Tribeca Film Festival is defending its inclusion of the film:

“The filmmakers provided a copy of this film to GLAAD in February, and for weeks the organization had been supportive to the filmmakers. In fact, GLAAD representatives advised the film’s producer, director and cast on how to describe the film to its core constituency. Tribeca is proud of its ongoing commitment to bring diverse voices and stories to its audiences, and looks forward to the film’s premiere at our Festival next month.”

An actor in the film (commenting on Movieline) says GLAAD lied on its website and that the organization has known about the film for more than a year:

"I'm in this movie and it's awesome.GLAAD has flat out lies on their website. they knew about this movie a while ago. they weren't "just alerted."Ticked-Off Trannies With Knives is Kill Bill for the GLBT set and is scary where it should terrify, funny when there's jokes (about appropriate material) and wham-bam-glam in the action sequences.The trailer mentions the hate crimes. The movie does not. I think the trailer mentions them to bring to light that stuff like what is in the movie actually happens and hopefully will not again."

Adds Abramovitch: "GLAAD is a funny little organization, on the one hand these self-appointed sentries for positive representation of gays in media, on the other a kind of nutless institution reluctant to get their Pradas dirty on the way to the awards show by, say, recognizing important but confrontational work like Kirby Dick’s Outrage. It’s baffling, really, when you then consider where they do choose to pick their battles."

Watch a "sneak peek" for Ticked Off Trannies with Knives, AFTER THE JUMP…