Financial planner Marc Delphine plans to announce his campaign for U.S. Senate in Oregon tomorrow at the Capitol in Salem. Delphine will be the first openly gay candidate to run for federal office in Oregon's history. 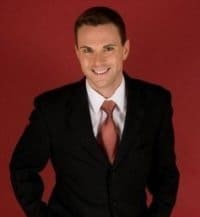 Today he filed as a candidate, seeking the Libertarian Party's nomination.

Writes Delphine on his website: "Since governments, when instituted, must not violate individual rights, I oppose all interference by government in the areas of voluntary and contractual relations among individuals (gay-marriage is an example of this). People should not be forced to sacrifice their lives and property for the benefit of others. They should be left free by government to deal with one another as free traders; and the resultant economic system, the only one compatible with the protection of individual rights, is the free market."

Just Out reports: "Per a press release, he 'is also the only challenger to Ron Wyden who has served as an elected official having been elected to the Tigard Water Board and a local school committee in the Beaverton School District.'
Delphine will formally announce the campaign launch in the State Capitol tomorrow morning, during which he’ll emphasize 'Principle-Centered Leadership.' The platform highlights 'individual liberty, personal responsibility and equal opportunity.'"

In an announcement, Delphine writes: "If you elect me as your Senator, one of my top priorities will be to do everything I can to stop our government from discriminating against anyone. In addition, my other top priority will be protecting everyone’s civil liberties. I will never vote on any bill that would infringe upon your freedoms."