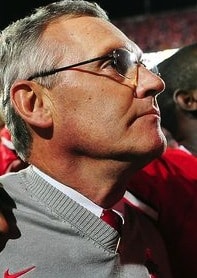 Jim Tressel, the popular Ohio State's sweater vest-wearing head coach who is a conservative Christian and was also a Bush supporter, was recently interviewed by Outlook, an Ohio GLBT magazine. According to the weekly, "this is the first time that a Division I NCAA head football coach has done a one-on-one with a GLBT publication." Tressel has some surprisingly supportive things to say about out gays on his team.

When asked what advice he would give to a player who came out to him, Tressel responded with this:

"We strive to teach and model appreciation for everyone. One, we are a family. If you haven't learned form your family at home that people have differences and those strengthen the whole, then you are hopefully going to learn it as a part of the Ohio State football family.

Two, every part of our team is important and every role has value – no job is too small and no person is irrelevant – that's a great lesson that transcends society. When I think of the diversity on our team the past few years, it goes way beyond just a racial, sexual or ethnic mix…Whatever a young man feels called to express, I hope we will help him do it in a supportive environment."