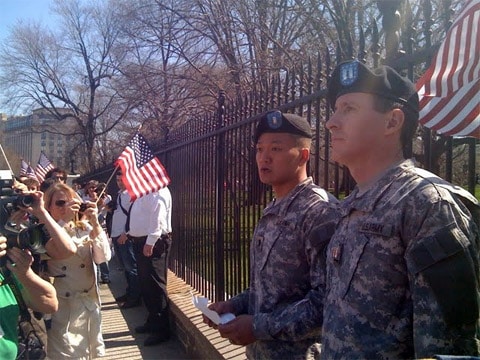 Lt. Dan Choi and Cpt. Jim Pietrangelo are being held at D.C. Central Cellblock, without bail, until a court hearing today.

If you are in the D.C. area, you can support Choi and Pietrangelo today at 1pm at Courtroom 115, 500 Indiana NW.

Americablog reports: "It increasingly looks as though someone has decided to play hardball with Dan and James. The Park Police say that Dan is not being released on bail. Dan also has not made his phone call to the person designed to pay his bail – the person's phone number is written on Dan's arm, so there's no chance he doesn't have it. That means that Dan apparently is not being permitted a phone call, and thus not being permitted to have anyone pay his bail. Why not? We have just learned that Dan is in fact being charged with "failure to obey a lawful order," yet that charge usually means you get processed, you pay bail, and you leave. Then why are they not letting Dan Choi leave, but instead are holding him to be arraigned? Why are they apparently not permitting Dan his phone call?"

GetEQUAL reports that McGehee was released with a $35 fine.

Pam Spaulding has some photos of the activists sitting inside Pelosi's office. Four of eight activists were arrested, transported to Central Cell Block in D.C., where Choi and Pietrangelo were being held. They were released without bail. Their court date is April 6.

Six of the eleven activists sitting inside Pelosi's offices in San Francisco were arrested, according to GetEQUAL's Kip Williams. They were detained, cited, and released with a fine for disturbance charge.

In NYC there is a protest outside the Times Square Military Recruitment Office from 12pm – 2pm in solidarity with Choi, Pietrangelo, and McGehee.

There is a DADT rally being organized in Orlando today.

No doubt I will hear about more, and will add them here.