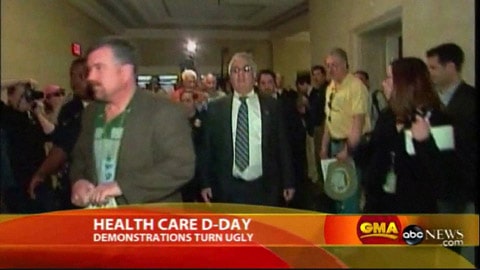 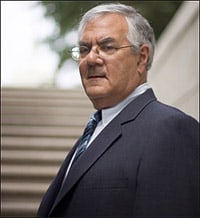 "As our Brian Beutler reports, a few moments ago in the Longworth office building, a group swarmed a very calm looking Henry Waxman, as he got on the elevator, with shouts of 'Kill the bill!' 'You liar! You crook!'Not long before, Rep. Barney Frank got an uglier version of the treatment. Just after Frank rounded a corner to leave the building, an older protestor yelled 'Barney, you faggot.' The surrounding crowd of protestors then erupted in laughter.At one point, Capitol police officer threatened to throw a group of protestors out of the building but that only seemed to inflame them more; and apparently none were ejected."

Also, The Hill reports: "Frank, an openly gay lawmaker, had to call the Captiol Police “to move away” five or six protesters who were banging on his office door and shouting through the mail slot…While making the trek across the street from his office to the Capitol, Frank was called a 'Homo Communist' and told to 'go homo to Massachusetts' by several protesters, according to witnesses and confirmed by Frank…Frank, a longtime advocate for lesbian and gay rights, called it 'unfortunate' that people protesting in the Tea Party event took to spewing 'bigoted, abusive, personal things' at him and some African-American members.'If this was a movement that I was part of, I’d be doing more than I think the Republicans are, to differentiate myself,' Frank said in an interview with The Hill that afternoon."

While outside the Capitol:

"Rep. Andre Carson (D-Ind.) claimed Saturday that healthcare protesters at the Capitol directed racial epithets at Rep. John Lewis (D-Ga.) as he walked outside. Carson, a member of the Congressional Black Caucus along with Lewis, told The Hill that protesters called Lewis the N-word."

Make sure not to miss the teabagger circus video I posted yesterday. Just a few of the ignorant numbskulls responsible.

Watch ABC News' report on the racist, homophobic teabaggers, AFTER THE JUMP…