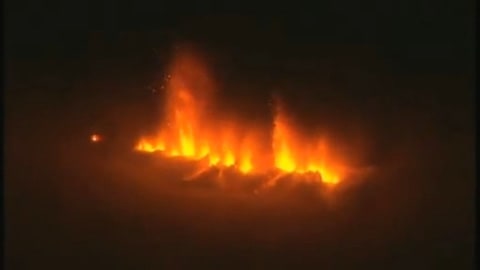 "Shortly before midnight, the Eyjafjallajökull glacier, the island's fifth largest, started to spew smoke and lava from several craters along a rift which is popular with hikers.Police declared a state of emergency and sent rescue teams to evacuate about 500 people living in the thinly populated area near the site. No injuries or damage to property were reported.Three Red Cross care centers were opened in nearby villages to assist the evacuated population." 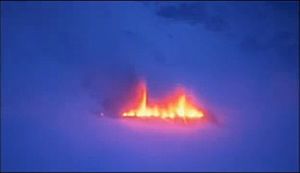 Eruptions from Eyjafjallajökull have traditionally been tied to a more powerful neighboring volcano, says one geophysicist:

"Eyjafjallajökull has erupted three times since the settlement of Iceland in the 9th century AD, in 920, 1612 and 1821. All three eruptions were rather small but caused flooding. However, there is a short distance to Katla, Einarsson said, which is a powerful and vicious volcano, ruv.is reports.'Katla is of a completely different kind […] but they seem to be connected, because all known eruptions in Eyjafjallajökull were related to Katla eruptions and therefore it seems that they might a prelude to eruptions in Katla,' Einarsson said.'Eyjafjallajökull might to a certain extent work as a detonator for a dynamite explosion,' the geophysicist added. 'If it goes off it is like Katla can’t resist it and also wants to join in. Those eruptions can be big and cause extensive damage.'

Watch video of the eruption, AFTER THE JUMP…