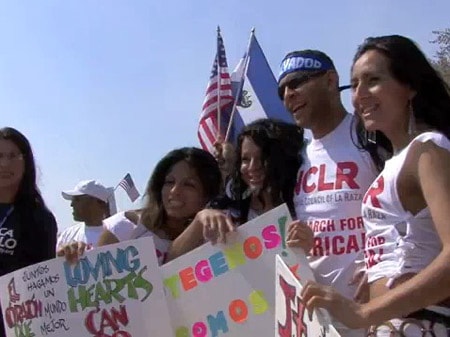 D.C. Agenda's Chris Johnson reports on the LGBT representation at yesterday's 'March for America' demonstration for immigration reform on the National Mall in Washington D.C.:

"The LGBT contingent, which included about 300 people, advocated for their inclusion as part of the broader immigration movement as well as for incorporating the Uniting American Families Act in reform. The bill would enable LGBT Americans to sponsor same-sex partners who are foreign nationals for residency. Rachel Tiven, executive director of Immigration Equality, said the showing was 'a nice visible contingent' that demonstrated 'how much the LGBT community is here for comprehensive immigration reform that includes all families.'"

Lt. Dan Choi, who does not miss a demonstration these days (and more power to him) makes a brief appearance in the video.

Joe Sudbay also has a report at Americablog: "Of course, the traditional media gave the event short shrift. A couple hundred teabaggers matters more than a couple hundred thousand LGBT activists or immigration rights activists. And, we share much of the same opposition. I'm always struck at how the language of those who hate immigrants so closely mirrors the language of the anti-gay crowd."