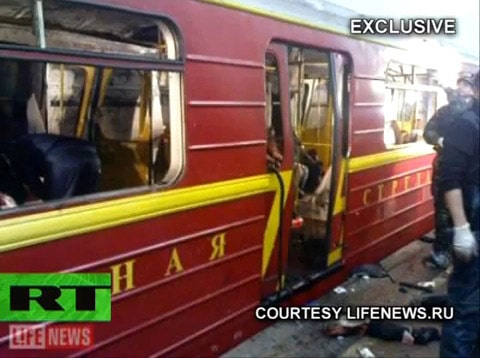 "The first attack occurred as commuters were exiting a packed train at a station near the headquarters of the F.S.B., the successor to the Soviet-era K.G.B. Officials said they suspected that the attack there was intended as a message to the security services, which have helped lead the crackdown on Islamic extremism in Chechnya and other parts of the Caucasus region in southern Russia.The two explosions spread panic throughout the capital as people searched for missing relatives and friends, and the authorities tried to determine whether more attacks were planned. The subway system is one of the world’s most extensive and well-managed, and it serves as a vital artery for Moscow’s commuters, carrying as many as 10 million people a day."

The bombings were blamed on Islamist separatist rebels from the Caucasus region.

The NYPD and D.C. police are increasing surveillance at subways stations around New York and the nation's capital as a precaution.

Watch footage shot shortly after the Moscow attacks (warning: graphic), AFTER THE JUMP…

Previous Post: « Watch: ‘He Kissed a Boy’ and He Liked It
Next Post: Photo: Gay Georgia Prom Teen Gets Hero’s Welcome in Atlanta »