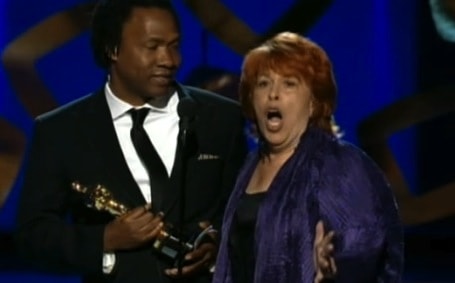 The most head-scratching thing to happen during last night's lackluster Academy Awards ceremony happened right the announcement that "Music by Prudence" had won for Best Documentary Short. Elinor Burkett, a one-time producer of the film who yanked herself from the project last year, pulled what's being referred to as a "Kanye West moment" by rushing on stage during director Roger Ross Williams' acceptance speech.

Apparently, the two have been in the midst of a beef about the film (both legal and otherwise) about the creative aspects of the film.

Burkett tells Salon her side of the story: "What happened was the director and I had a bad difference over the direction of the film that resulted in a lawsuit that has settled amicably out of court. But there have been all these events around the Oscars, and I wasn't invited to any of them. And he's not speaking to me. So we weren't even able to discuss ahead of the time who would be the one person allowed to speak if we won. And then, as I'm sure you saw, when we won, he raced up there to accept the award. And his mother took her cane and blocked me. So I couldn't get up there very fast."

And Williams his: "That was handled by the publicist for the academy. I don't know what they told her. The academy is very clear that only one person can speak. I own the film. She has no claim whatsoever. She has nothing to do with the movie. She just ambushed me. I was sort of in shock."

Watch a clip of the weirdness here.