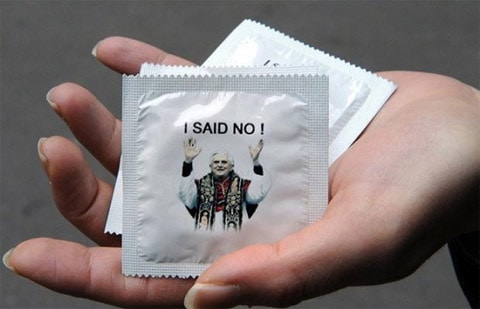 The Pope's visit to the UK in September will go on as planned, despite the disclosure over the weekend of a memo written by a staffer at the British Foreign Office which mocked Benedict and the Vatican, suggesting a provocative itinerary which included the launch of a line of Pope condoms, the blessing of a gay civil partnership, and a speech on equality.

The AP reports: "The document featured a diagram listing people likely to have an influential role during, or in commenting on, the visit — which ranked Scottish singer Susan Boyle, the surprise reality television star, as more important than Archbishop of Westminster Vincent Nichols, the head of the Catholic Church in England and Wales.

An accompanying note acknowledged many of the ideas contained in the memo were extreme. 'These should not be shared externally…,' it read, explaining the document was 'the product of a brainstorm which took into account even the most far-fetched of ideas.''' 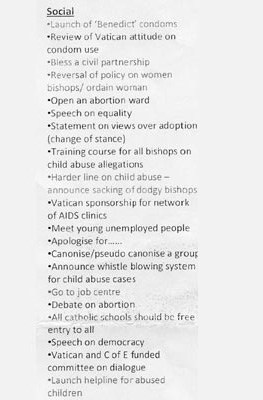 Ministers have apologized for the memo:

"The proposals, which were then circulated among key officials in Downing Street and Whitehall, also include the Pope opening an abortion ward; spending the night in a council flat in Bradford; doing forward rolls with children to promote healthy living; and even performing a duet with the Queen.
In reference to the hugely sensitive issue of child abuse engulfing the Catholic Church, the Government document suggests that the Pope should take a 'harder line on child abuse – announce sacking of dodgy bishops' and 'launch helpline for abused children'.
The document was sent out by a junior Foreign Office civil servant with a covering note admitting that some of the plans were 'far-fetched'."

It has been revealed that the author of the memo is a 23-year-old Oxford graduate and junior civil servant named Steven Mulvain:

"It was dreamt up in a Foreign Office brain-storming session to generate ideas for the Pope's visit.

Mr Mulvain has not been punished because a more senior civil servant who authorised him to send the document has now been 'transferred to other duties'…Vatican sources told The Times that the incident could have jeopardised Pope Benedict's first tour of Britain and senior Church officials are said to be outraged that no one has been fired."