Growing up, I didn't really know what civilians did, I just knew I would follow in my father's footsteps and become a military officer.

Stationed in Oklahoma, I was named officer of the year for my unit of nearly 1,000 people. Later, I was one of six officers selected from the entire Air force to attend Professional Military Education at Quantico, Virginia.

During my career, I deployed to the Middle East four times. In my last deployment, I led a team of nearly 200 men and women to operate and maintain the systems used to control the air space over Iraq. We came under daily mortar attacks, one of which struck one of my Airmen and also caused significant damage to our equipment. Towards the end of this deployment to Iraq, I was named one of the top officers in my career field for the entire Air Force.

In the stress of a war zone, the Air Force authorized us to use our work email accounts for “personal or morale purposes” because private email accounts were blocked for security.

Shortly after I left Iraq — during a routine search of my computer files — someone found that my “morale” was supported by the person I loved — a man.

The email — our modern day letter home — was forwarded to my commander.

I was relieved of my duties, my security clearance was suspended and part of my pay was terminated.

In my discharge proceeding, several of my former troops wrote character reference letters for me, including one of my squadron commanders. Their letters expressed their respect for me as an officer, their hope to have me back on the job and their shock at how the Air Force was treating me.

Approximately a year after I was relieved of my duties, my Wing Commander recommended I be promoted to Lieutenant Colonel, even though the Air Force was actively pursuing my discharge.

But instead, after 16 months, I was given a police escort off the base as if I were a common criminal or a threat to national security. The severance pay I received was half of what it would have been had I been separated for any other reason.

Despite this treatment, my greatest desire is still to return to active duty as an officer and leader in the United States Air Force, protecting the freedoms of a nation that I love; freedoms that I myself was not allowed to enjoy while serving in the military.

Mr. President, I want to serve. Please fulfill your promise to repeal DADT and give me that chance.

"Stories from the Frontlines: Letters to President Barack Obama” is a new media campaign launched to underscore the urgent need for congressional action and presidential leadership at this critical point in the fight to repeal “Don’t Ask, Don’t Tell” (DADT). As we approach the markup of the Defense Authorization bill in the Senate and House Armed Services Committees, SLDN and a coalition of voices supporting repeal, will share open letters to the President from a person impacted by this discriminatory law. We are urging the President to include repeal in the Administration’s defense budget recommendations, but also to voice his support as we work to muster the 15 critical votes needed on the Senate Armed Services Committee to include repeal. The Defense Authorization bill represents the best legislative vehicle to bring repeal to the president’s desk. It also was the same vehicle used to pass DADT in 1993. By working together, we can help build momentum to get the votes! We ask that you forward and post these personal stories. 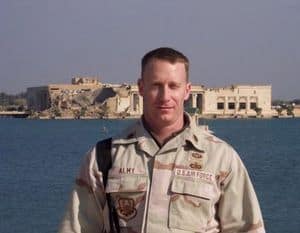 For thirteen years, I served in the United States Air Force where I attained the rank of major before I was discharged under DADT.

As the Senate Armed Services Committee considers including repeal in the Defense Authorization bill, we’re very close — just two or three votes — to passing repeal in committee. I ask for you to voice your support to put us over the top.

I come from a family with a rich legacy of military service. My father is a West Point graduate who taught chemistry at the Air Force Academy, flew helicopters in Vietnam, and ultimately retired as a senior officer from the Air Force. One of my uncles retired as a Master Gunnery Sergeant from the Marine Corps, with service in World War II, Korea and Vietnam. Another uncle served in the Army in Korea.