California State Senator Leland Yee has received a barrage of anonymous racist and homophobic threats after calling on the president of CSU Stanislaus to release details of Sarah Palin's contract for an upcoming speaking engagement. 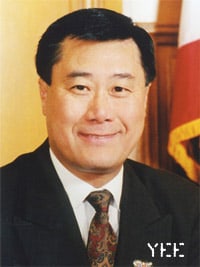 An expletive-laden fax received yesterday in the Senator’s San Francisco and Sacramento offices says, “To: JoBama Rectum Sniffer Fish Head Leland Yee” and then in all capital letters, “WERE YOU TO EXTRACT YOUR HEAD FROM TREASONOUS MARXIST NIG**R HUSSEIN OBAMA’S RECTUM, YOUR BRAIN WOULD STILL FUNCTION AT ITS PRESENT MUCH DIMINISHED LEVEL BUT AT LEAST THE NIG**R SH*T SMELL WOULD EVENTUALLY DISSIPATE.”

The fax, which included a graphic of an American flag adorned pickup truck dragging a noose, also states “FIGHTING The Marxist Nig**r Thug Hussein Obama” and “Safeguard the Constitution, Death of all Domestic Marxists!”

Another fax received by the Senator’s office with a similar graphic says, “NEW WEBSITE COMING SOON: lyeesucksobamasnig**ras*.com,” as well as “JoBama. HE IS BRAVE ENOUGH TO KILL OUR UNBORN, JUST NOT BRAVE ENOUGH TO CALL OUR ENEMIES WHAT THEY ARE: Muslim Terrorists!” The fax also includes a rifle scope targeting a shirt with the communist hammer and sickle symbol dripping with blood.

One of the phone messages left after hours in Yee’s office voicemail says, “You know, I heard that Senator Yee wants to nix Sarah Palin from speaking at Stanislaus State…Maybe we ought to have a homosexual with a long enough di*k to where he can stick it up his as* and fu*k himself while he is on stage giving a speech. That would be acceptable to Leland Yee. So, good thing you run in San Francisco ‘cause you’d never make it anywhere else.”

Yee's request came following reports that students had discovered several pages of a Palin contract in a school dumpster after the university claimed there was no contract. The contract revealed that her requirements included "a hotel suite, first class airfare or a private Lear jet, pre-screened questions, and 'bendable straws.'" The Senate Sergeant at Arms is looking into the threats.