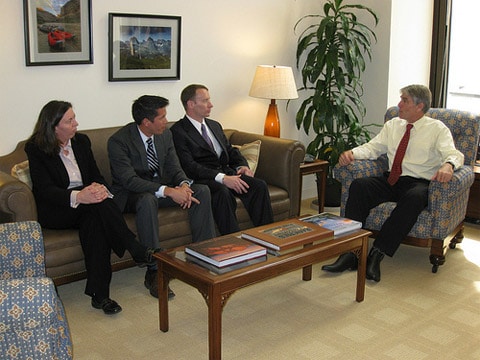 Following a meeting with three service members — veterans Mike Almy, Stacy Vasquez and David Hall — Senator Mark Udall (D-CO) released a statement on his blog acknowledging the need for a military "study" but also urging repeal of the military gay ban this year:

The Pentagon is studying how to implement an end to “Don’t Ask, Don’t Tell,” and while I agree that is a necessary step, I also believe strongly that we must repeal it this year. I will continue to work with other senators to ensure that the repeal is included in the Defense Authorization bill, which will be marked up in the Senate Armed Services Committee next month. But we still face an uphill battle, and we will need a bipartisan push to clinch this urgent effort. The stories these dismissed service members told me today are extremely powerful and compelling, and they’ll help as I urge my colleagues to support repeal. The countless men and women who currently are unable to serve our country honestly deserve a change. And I believe it’s imperative for our national security..

Udall's remarks come at a moment of increasing concern that the White House and Congress are prepared to push repeal further down the road.