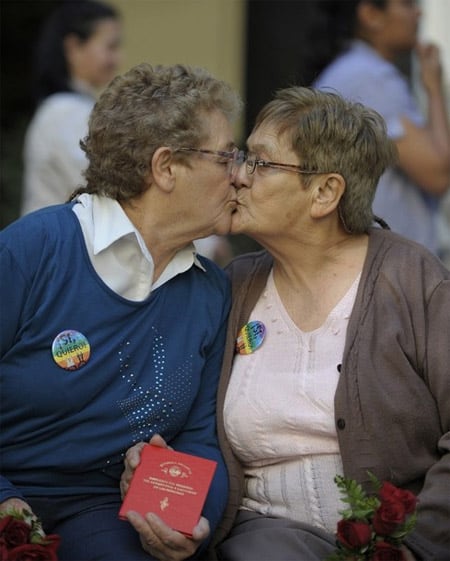 Somehow I missed this:

"Two women that were exiled during the last Argentine military dictatorship (1976/1983) were married Friday in Buenos Aires, the first wedding among lesbians in the country, reported the Lesbian, Gay, Bisexual and Transgender Federation of Argentina, or FALGBT.

Norma Castillo, from Uruguay, and Ramona Arevalo, Argentine, were married by Judge Elena Liberatori after having requested legal protection within the framework of the campaign 'Same right, same names,' which the LGBT Argentine Federation has been carrying out for several months. They are both 67 years old and have been a couple for over 30 years.

'They asked for legal protection because they love each other and wanted their family to be recognized by the State,' said the Federation in an official release."

Same-sex marriage is currently not enshrined nationally in law in Argentina, though its Supreme Court is hearing two cases on it. Late last year a judge in Argentina's Tierra del Fuego province married two gay men. Wrote the AP: "Argentina's Constitution is silent on whether marriage must be between a man and a woman, effectively leaving the matter to state and city officials."