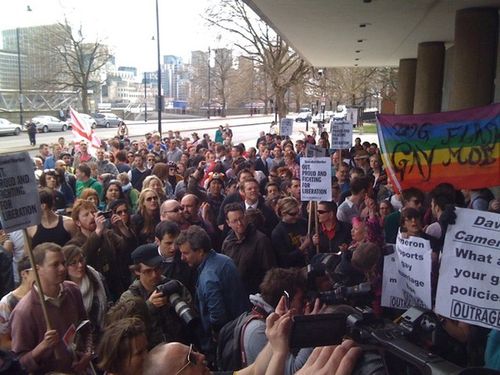 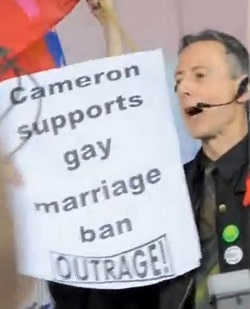 "The flashmob event, dubbed David Cameron's coming-out party, gathered outside the Conservative party headquarters in London's Westminster.Organised by lesbian activist Tamsin Omond and human rights campaigner Peter Tatchell, it gathered pace via social networking site Facebook after Shadow Home Secretary Chris Grayling's infamous comments that B&B owners should be allowed to discriminate against gay couples.Activists, some of whom held placards which read 'Come Out Cameron' and 'David Cameron: What Are Your Gay Policies?', also wrote 'Fuck Off Back To Eaton' on the Conservative party building with white chalk – although the event was peaceful. "Right now, the Tories don't have any official lesbian and gay rights policies," said Tatchell."

The Tories are trying desperately to repair their reputation with gays. 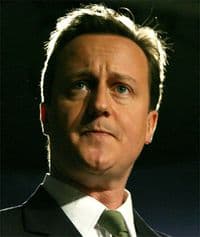 During the meeting with Mr Thatchell (sic), Mr Osborne said the Conservatives would 'be happy' to consider legalising gay marriages if they win power on May 6th, though there were complaints afterwards that he had been 'too vague'.British civil partnership legislation offer gays and lesbians similar legal protections as married couples on pensions, social welfare, etc, but the Labour government backed away from describing the ceremonies as marriages when the legislation was passed in 2004.The Conservatives’ popularity with gays and lesbians had earlier been damaged after party leader David Cameron (pictured) bungled an interview with the Gay Times newspaper, when he was asked if he would give MPs and peers a free vote on gay rights issues…Launching his campaign last week, the Tory leader caused further offence when it was learned that he had left out a scripted reference to gays in a speech where he said he was fighting the election for 'the great ignored: they may be black or white, rich or poor'.On Saturday, Mr Cameron said the Tories would change the law to clear the criminal records of those who were convicted of consensual homosexual sex in the days before it was legalised."

According to the Daily Mail, "Mr Cameron also pledged 'zero tolerance' towards homophobic bullying in schools."

Check out the video of the big gay flashmob, AFTER THE JUMP…