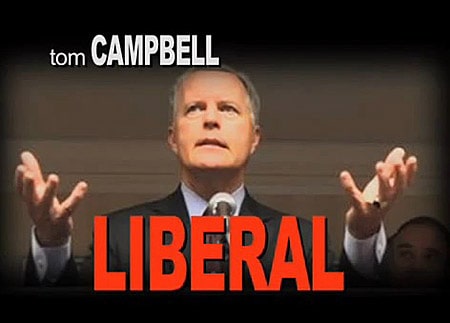 Gay conservative group GOProud attacks Republican senate candidate Tom Campbell over his refusal to sign a pledge not to raise taxes. Or is it because he's a longtime friend of rival group Log Cabin Republicans?

Writes Dennis Sanders in The Moderate Voice: "GOProud has done some very ballsy things, such as co-sponsor this year’s CPAC conference. In many ways, the split between Log Cabin and GOProud mirrors the larger debate taking place in the GOP. Log Cabin tends to be a 'broad church' movement in that it is made up of different kinds of Republicans, who all agree on the promotion of gay equality. So, while the group does espouse conservative values and does criticize the Democrats on issues other than gay rights, they are focused on the issue of gay civil rights and they exclude talking about other issues like abortion.GOProud is a little different. It tends to be in tune with the conservative movement and tackles the same issues that the wider movement deals with, such as taxes."

Campbell, who is vying with Carly Fiorina in a bid to unseat Barbara Boxer, supports marriage equality, a fact not addressed by GOProud or the ad.

Previous Post: « Abercrombie to Pay CEO Jeffries $4 Million to Limit Private Jet Use
Next Post: ‘Focus on the Family’ and AFA to Defy Any Gay SCOTUS Nominee Because ‘Homosexual Behavior is a Sin’ »