Former Arkansas Governor Mike Huckabee gave an interview this week to the College of New Jersey news magazine The Perspective, and discussed several gay rights issues. Huckabee said the implementation of gays in the military would be a "social experiment". He compared gays who want to get married to drug users and polygamists. And he warned that parenting was a serious matter, suggesting that gays and lesbians who adopt were experimenting, as if with pets. 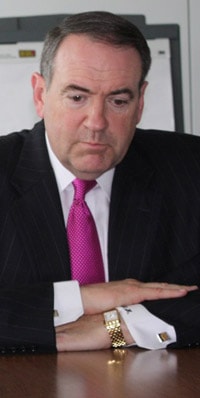 "I wouldn’t support a repeal if I were commander-in-chief…You don’t see foot soldiers out there demanding it. I’m not sure that’s the most important thing we ought to be doing for the military. … [‘Don’t Ask Don’t Tell’] touches an extraordinarily small group of people. [Calls to repeal it are] primarily a posturing point for political purposes [and an attempt to] force something on the military that they themselves haven’t pushed that hard. I think we certainly should be very sensitive to the fact that the purpose of the military is not to see if we can create social experiments."

On gay adoption and foster care:

"I think this is not about trying to create statements for people who want to change the basic fundamental definitions of family. And always we should act in the best interest of the children, not in the seeming interest of the adults…Children are not puppies. This is not a time to see if we can experiment and find out, how does this work?"