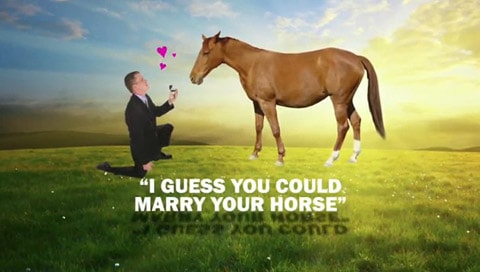 Back in March, the challenger to John McCain's Senate seat in Arizona made a statement that same-sex marriage could lead to man-horse marriage. McCain mocks that statement in a new video that takes aim at some of Hayworth's more absurd statements.

McCain's position on same-sex marriage, however, is basically the same as Hayworth's minus the horse sex warnings.

Previous Post: « Towleroad Guide to the Tube #632
Next Post: Deputy Pope: ‘There is a Relationship Between Homosexuality and Pedophilia. That is True. That is the Problem.’ »