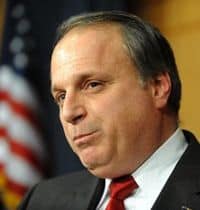 House Minority leader John Boehner has asked the ethics committee to investigate how it could be that supervisors did not notify congressional authorities until after more than a year of complaints from staffers.

Massa's chief of staff Joe Racalto claims he himself was a victim of Massa's advances. Racalto also said "he pulled Massa out of a Dupont Circle bar in December when he could not get Massa to stop making inappropriate comments to a 21-year-old intern and another male staffer."

Also: "One gay male staffer said he complained to Racalto in spring 2009 that Massa routinely made sexualized remarks to him. The staffer told Racalto he had grown distressed, because of two incidents he had heard about involving Massa allegedly making unwelcome sexual advances when sharing a hotel room with staffers.

The staffer said that Racalto assured him that Racalto would talk to Massa and put a stop to this kind of conversation. But by summer, according to several sources, Massa's sexual commentary had escalated and some of it was directed at an intern."

Massa also requested to take an intern with him on trips to the West Coast but was blocked by Racalto after staffers begged him. He also solicited sex from a bartender at the funeral of a Marine slain in Afghanistan which became the incident which led to his resignation.

A former aide to Massa has filed a complaint about the former congressman to the Office of Compliance, opening the door to legal action, Politico reports:

"Debra Katz, the attorney for the former aide, says a complaint alleges that Massa, a freshman Democrat from New York, “subjected my client and other young gay men” to “unwelcome touching, sexual propositions, groping, sexualized comments” and similar forms of harassment both inside his official congressional office and outside of it…If the matter is not resolved, a claimant can then file a civil suit in federal district court – though only monetary damages, not civil or punitive damages, may be recovered, according to the office’s Web site.

It’s not clear when Katz’s client filed his claim, and Katz would not reveal the name of her client. But she did say that Massa aides had little recourse to combat what they viewed as inappropriate behavior by their boss. "

Previous Post: « Vatican Distances Itself from Cardinal’s Assertion That Pedophilia is Linked to Homosexuality
Next Post: Kellan Lutz Loved Getting Muddy and Watering the Pigs »