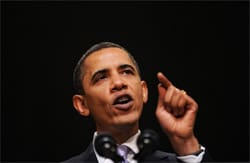 "President Obama on Thursday signed a memorandum requiring hospitals to allow gays and lesbians to have non-family visitors and to grant their partners medical power of attorney.

The president ordered the Department of Health and Human Services to prohibit discrimination in hospital visitation. The memo is scheduled to be made public Friday morning, according to an administration official and another source familiar with the White House decision.

An official said the new rule will affect any hospital that receives Medicare or Medicaid funding."

The paper notes: "The decision injects the president squarely into the debate over gay marriage by attempting to end the common practice by many hospitals of insisting that only family members by blood or marriage be allowed to visit patients."

HOWEVER, the memo closes (READ IT HERE) : "This memorandum is not intended to, and does not, create any right or benefit, substantive or procedural, enforceable at law or in equity by any party against the United States, its departments, agencies, or entities, its officers, employees, or agents, or any other person."

Still, a powerful step in the right direction. Let's hope it's not (as I fear it might be) strategically timed to try to quash disappointment over stalling, inaction, and/or loss on some of the larger and more comprehensive issues that are pending in our legislature, like ENDA and DADT.

From the NYT: "Richard Socarides, who advised President Bill Clinton on gay rights issues, said that while the memorandum on its own does not grant any new rights, it 'does draw attention to the very real and tragic situations many gays and lesbians face when a partner is hospitalized.' Ordering the Department of Health and Human Services to find a better way to handle such situations, Mr. Socarides said, is 'the kind of thing the gay community was hoping Obama would do right after he was inaugurated.'"