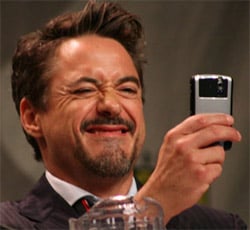 Robert Downey Jr. is in talks to play the Wizard of Oz in a new film based on the book series by L. Frank Baum.

Cinematical reports: "With the James Bond franchise halted (sad face), Sam Mendes has quickly found another project to latch onto, and boy does it sound Oz-some. According to a Production Weekly tweet, he's the front runner to direct Oz The Great and Powerful, based partly on the L. Frank Baum books that also gave us such films as The Wizard of Oz and Return to Oz. Like the latter (and to some extent The Muppets' Wizard of Oz), this film is set up at Disney. And here's the best part: Robert Downey Jr. is first choice to play the ol' Wizard. Because it had to be him or Johnny Depp, right?"