Media is moved from Lafayette Park: 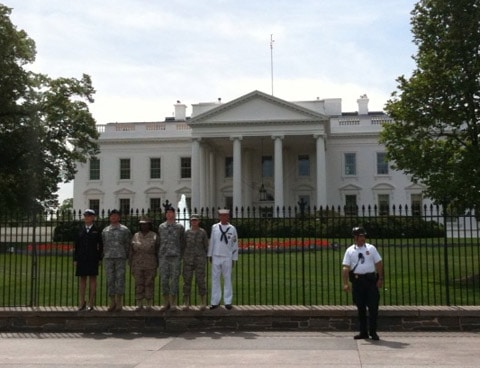 Six military veterans, three women and three men including Lt. Dan Choi and Capt. Jim Pietrangelo have handcuffed themselves to the White House fence in a protest against "Don't Ask, Don't Tell".

Video of Choi speaking, AFTER THE JUMP… 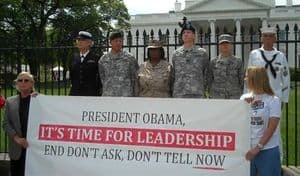 GetEqual writes in a press release: "Moments ago, Lt. Dan Choi along with five other lesbian, gay, bisexual and transgender (LGBT) discharged veterans — Capt. Jim Pietrangelo II, Petty Officer Larry Whitt, Petty Officer Autumn Sandeen, Cadet Mara Boyd, and Airman Victor Price — handcuffed themselves to the White House gates to demand that President Obama keep his promise to repeal 'Don’t Ask, Don’t Tell' this year. The vets are concerned about mounting signs that the President is wavering on his promise to push for repeal this year."

Said Choi: “We are handcuffing ourselves to the White House gates once again to demand that President Obama show leadership on repealing ‘Don’t Ask, Don’t Tell.’ If the President were serious about keeping his promise to repeal this year, he would put the repeal language in his Defense Authorization budget. The President gave us an order at the Human Rights Campaign dinner to keep pressure on him and we will continue to return to the White House, in larger numbers, until the President keeps his promise to repeal ‘Don’t Ask, Don’t Tell’ this year.”

GetEQUAL has posted a page about the action currently taking place.

12:45 pm: The media has apparently been pushed way back and Lafayette Park has been closed.

1:00 pm: The service members have reportedly been removed from the fence, put in a paddy wagon, and arrested.

Video of Choi speaking, AFTER THE JUMP… 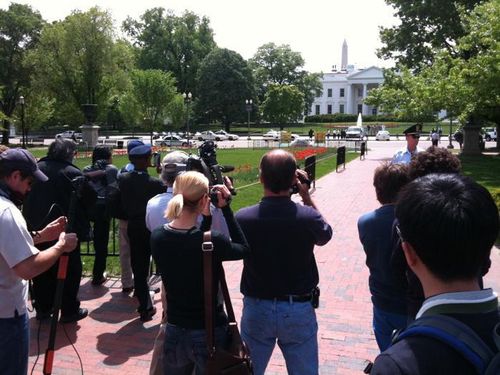 Questions are now being raised about censorship of the press in this instance (see video, AFTER THE JUMP).

Ben Smith at Politico: "Police chased reporters away from the White House and closed Lafayette Park today in response to a gay rights protest in which several service members in full uniform handcuffed themselves to the White House gate to protest 'Don't Ask, Don't Tell.'People who have covered the White House for years tell me that's an extremely unusual thing to do in an area that regularly features protests."

Why did the White House do this?

(images by john aravosis via rex wockner and twitter, video via americablog)