Three teenage girls in Kentucky allegedly attacked Cheyenne Williams, a lesbian classmate, last Friday (coincidentally, the national Day of Silence) and tried to push her off a cliff. Johnson's mother says she was attacked because she's openly gay, the Lexington Herald-Leader reports: 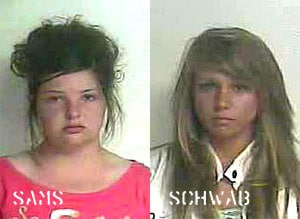 "Those charged in the alleged attack — who attended Jackson County High School with Williams — are Ashley N. Sams, 18, of Annville; Corrine M. Schwab, 18 of Sandgap; and a 17-year-old girl. Her name and the charges against her have not been released because she is a juvenile.
Williams said the three teens took her against her will to Flat Lick Falls, physically abused her and tried to push her off a cliff.
Johnson said her daughter had the presence of mind to videotape the attack on her cell phone.
'There's proof on the video that this is a hate crime,' Johnson said.
A hate crime is an offense motivated, in whole or in part, by bias based on race, religion, sexual orientation, disability or ethnicity/national origin, according to the FBI Web site."

The teens have been charged with attempted murder and kidnapping. Both have been released on $25,000 bond.

Johnson was able to defend herself from her attackers with a stick, the paper reports.