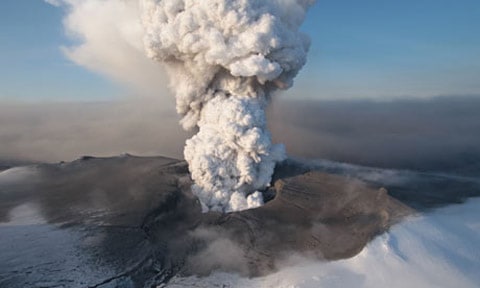 The Eyjafjallajokull continues to erupt in Iceland, affecting huge parts of northern Europe. It shows no signs of stopping, thought recent reports suggest the larger blasts have eased for the moment.

"In Iceland, the volcano continued to erupt, but volcanologists said it was less explosive than at the beginning of the eruption on Wednesday, which blasted glassy abrasive ash, destructive to jet engines, eight miles into the sky. The plume is now rising to a height of just three miles, and volcanologists said this would deposit ash only in Iceland and surrounding waters. It is not high enough to travel thousands of miles across Britain and the rest of Europe.Matthew Roberts, a glaciologist at the Iceland Meteorological Office, said they had not ruled out further big blasts but added: 'There is currently no new material being added to the ash stream affecting aviation in Europe.'"

Obama has canceled his trip to the funeral of Polish President Lech Kaczynski due to the ash situation.

The NY Times now has a tracker for airport closures. Below, a map of the concentration of ash levels in the atmosphere. 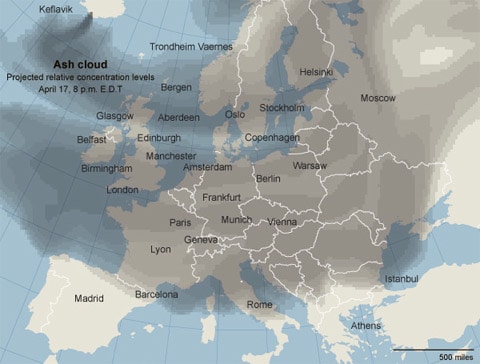 So far, the output of the Iceland volcano is not enough to affect the upcoming summer:

"Mt. Eyjafjallajokull (say it 10x fast) isn't shaping up to drastically alter temperatures this year. At least, not so far, according to Alan Robock, professor of environmental sciences at Rutgers.Robock told Climate Central's Andrew Freedman on Thursday that the output of Mt. Eyjafjallajokull hasn't put enough sulfur dioxide into the atmosphere to create the sort of "Two-thousand-and-froze-to-death" conditions some have feared.Sulfur dioxide particles from volcanoes can temporarily cool the planet by reflecting solar radiation back out into space, effectively limiting the amount of warmth that reaches Earth's surface."

Below, a shot of a car driving through the ash dust in Iceland (via The Frame, which has more stunning photos).

Some recent footage of the volcano from the AP, AFTER THE JUMP… 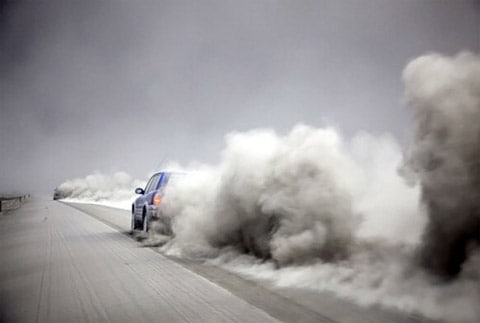