Volume is low, so you may want to turn it way up.

This week a two-day extreme right-wing conference took place at Liberty University — basically an anti-gay wingnut convention. Wayne Besen at Truth Wins Out has a report. 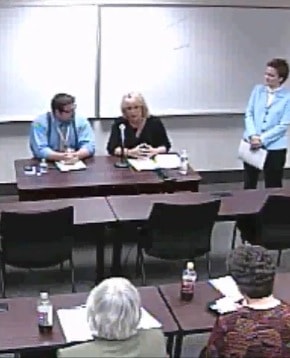 Besen writes: "The big news here is that radical cleric Lou Engle of The Call conceded, at a the LGBT Agenda breakout session, that the next generation is largely supportive of LGBT rights. (but not on abortion) He claims that the far right has lost on this issue barring a miracle, such as an intercession at a 500,000 youth rally that Engle floated to the activists on-stage and in the audience. Matt Barber said they should privately discuss such a rally after the forum."

There were smaller panels at the conference too. Check out this video (via Right Wing Watch) from a panel headed up by Matt Barber of the Liberty Counsel and Andrea Lafferty of the Traditional Values Coalition.

Lafferty warns those gathered that ENDA, which would protect LGBT people against discrimination in employment, would also protect veterans returning from Iraq who have stump fetishes, among other things.

Says Lafferty: "What are those 'isms' and 'philias'? You can be aroused by stumps of amputees. And we brought that up during the hate crimes thing because what if you have an employee working at the VA and someone has just come back from Iraq and they have this orientation. You can't fire them. What about the family that's upset that they've been aroused by their family member? It's disgusting. And it's tragic for the victim.Um, men that want to rub their bodies up and down women. That's on the list, that might become a protected class.Fecal matter. Their involvement with fecal matter. Or urine. Transvestism. The list goes on, I'm not naming all of them. Children. Animals. And so we really need to draw a line in the sand."

Sex must be on the minds of these wingnuts all day long because their imagination for kinky situations knows no bounds.