Although five couples have married in Argentina since December with no legal framework to do so, they may soon have one. Last night, Argentina's House of Deputies passed a marriage equality bill by a vote of 129-105. 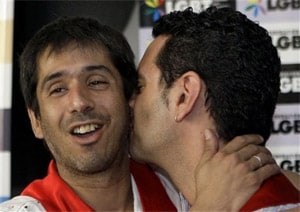 "Speaking live on CN5, Maria Rachid, Director of The Argentinian LGBT Federation (FALGBT), noted that it was the first time that the body of a legislative branch of a government had voted in favor of same-sex marriage in all of Latin America.

The vote followed more than 11 hours of debate on the House floor and counted with the support of members of the Socialist Party as well as supporters of the Cristina Férnandez de Kirchner government [Deputies were freed by their parties to "vote their conscience" earlier in the day].

To become law, the Argentinean Senate would first have to debate and approve the bill. Getting a bill approved by the Senate is expected to be a much tougher challenge for marriage equality advocates although the House vote pushes the issue to the front and it is now expected that a Senate vote might come within weeks."

Alex Freyre and Jose Maria do Bello (above), the first same-sex couple married in the country, were on the floor when the bill passed.