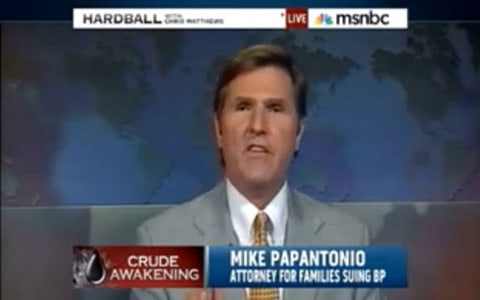 Chris Matthews talked to attorney Mike Papantonio, who is leading a class action suit against BP about the Gulf oil leak. Papantonio says the leak can't be stopped an Obama must get moving.

I hope he`s wrong, Chris, but I hate to hear the talk coming from David Axelrod, like we`re all in this together and everything`s going to be OK. There are two different issues here. Stop the leak. The other issue, though, is clean up the mess. They know how to clean up the mess. Back in Saudi Arabia, in 1994, they had a 700 million dollars — 700 million gallon spill. And you know what they did, Chris? They brought in tankers from all over the world and they sucked it up out of the bays, and they treated it. And you know what? They cleaned up 85 percent of it.

You know where those tankers are right now? They`re filled up. They`re waiting for the market to change so they can go unload in Asia and Europe. Those tankers have the technology and the ability to suck it right out of the water and treat it.

There are two different issues. The leak may never stop. But for Axelrod not to address the real problem — the entire gulf coast is dying because right now, Obama has the bully pulpit. You want — you want to know the most — the most effective thing Obama has control of, that`s the bully pulpit, and he needs to sound like Huey Long right now, not Gandhi. We`re tired of the Gandhi speech. We`re tired of kumbaya. I`m tired of the David Axelrods saying we have Dr. Chu and we`re going to solve this problem. 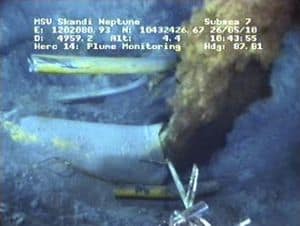 "The consequences for BP are profound: A successful capping of the leaking well could finally begin to mend the company’s brittle image after weeks of failed efforts, and perhaps limit the damage to wildlife and marine life from reaching catastrophic levels.A failure could mean several months more of leaking oil, devastating economic and environmental impacts across the gulf region, and mounting financial liabilities for the company. BP has already spent an estimated $760 million in fighting the spill, and two relief wells it is drilling as a last resort to seal the well may not be completed until August.Officials planned to begin the procedure Wednesday morning, and they said it could take from 12 hours to a few days to determine whether the operation is successful."

The "top kill" attempt will be streamed live, despite reports to the contrary.

Watch Papantonio, AFTER THE JUMP…