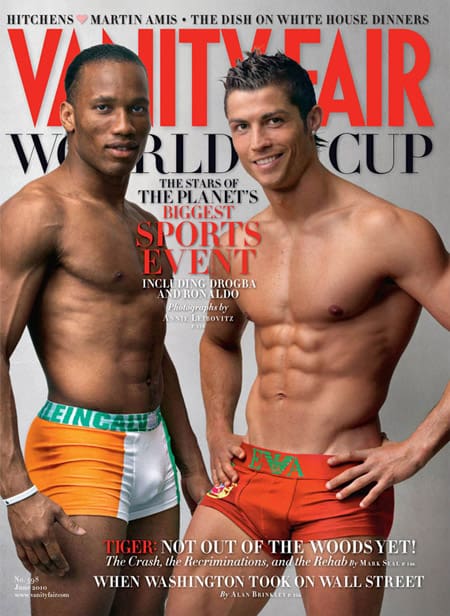 The NY Post reports that Cristiano Ronaldo is not happy he had to share the June pin-up cover with another player, rival Didier Drogba:

"Rivalry between two of the world's best players is strong, and Ronaldo's team, Portugal, will take on Drogba's Ivory Coast in their opening World Cup match June 15.
One source told us that Ronaldo… has complained Vanity Fair widely used his image to market its June issue. 'Ronaldo is freaking out,' the source said. 'He says he wants to sue Vanity Fair for using his image to promote the issue everywhere. Even though this is pretty standard practice in the magazine world, he and his managers insist only they have control of his image and where it can be used. But no legal action has been launched, and there are whispers that what really upset Ronaldo was that, having stripped off to his underpants for the shoot in Madrid, he didn't envisage sharing the cover with another player photographed in Milan.'
Ronaldo, 25, became the highest-paid soccer player in the world last June when Real Madrid bought him from Manchester United for a record-breaking $130 million."