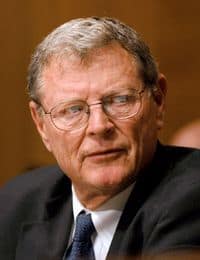 Senator James Inhofe thinks all soldiers are as bigoted as he is, suggesting in an interview with the American Family Association yesterday that service members would be less willing to sacrifice — less willing to fight and die — if they knew "the guy in the next foxhole" was gay.

Said Inhofe: "For those of us…and I’m one of them…who have gone through the military, gone through basic training, and you stop and think… it just doesn’t make any sense. Second of all, it’s just not working. You have women, men, then you have a third group to deal with, and they’re not equipped to do that.And you know…you hear the stories all the time. A military guy…I happen to be Army, and Army and Marines always feel that when we’re out there, we’re not doing it for the flag or the country; we’re doing it for the guy in the next foxhole. And that would dramatically change that."

You may recall Inhofe as the senator whose family never had a gay or a divorce.