Evan Lysacek tells Us magazine that he "never should have answered" the recent question from MetroMix magazine on why Johnny Weir wasn't chosen for the "Stars on Ice" tour. 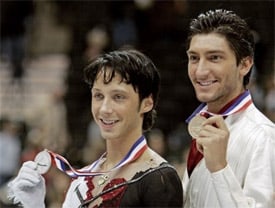 If you remember, Lysacek said, "'Stars on Ice' is really selective of who they hire and they only hire the best of the best to skate. It would’ve been hard of them to justify hiring him, and I think he was really upset because he wanted the financial benefit of the tour. A lot of us in the skating world were really disappointed in the way he reacted, basically whining that he wasn’t chosen."

Lysacek tells Us: "[Johnny Weir] is an accomplished and talented skater…Since the Olympics, I've dealt with Johnny's questioning my integrity and sexuality, and I've never spoken out on my own behalf no matter how hurtful those things may have been. I should have known better…Best wishes and congratulations to Johnny as he opens the new season of Ice Theatre of New York. I wish him well in all of his future endeavors."