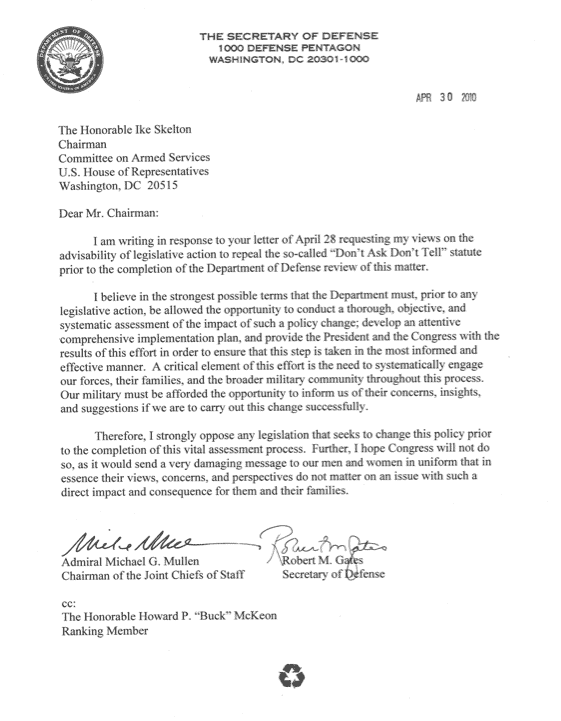 Hot on the heels of yesterday's news about a letter written by Defense Secretary Robert Gates and Admiral Michael Mullen in which the duo suggest holding off on repealing DADT come reactions from The Human Rights Campaign, Servicemembers Legal Defense Network and The Palm Center. 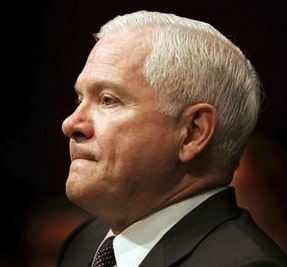 HRC: “Today’s letter from Secretary Gates and Admiral Mullen to House Armed Services Committee Chairman Ike Skelton flies in the face of the President’s commitment in the State of the Union address to work with Congress to repeal the discriminatory “Don’t Ask, Don’t Tell” law this year.  If the President is going to fulfill his promise it is essential that he address this contradiction immediately.  It is inconceivable that the Secretary of Defense would so blatantly undermine the Commander-in-Chief’s policy commitment."

SLDN: “It's time for the president and commander in chief to speak clearly and frankly on this issue. The commander in chief sounds like he is deferring to his Defense Secretary, to a House Chairman who opposes him on repeal, and to his political operatives.

“With all due respect to Secretary Gates, it is Congress that determines the legislative schedule, not the Secretary of Defense. Congressional leaders and repeal advocates may need to give the Pentagon leaders a gentle reminder."

Palm Center: “The White House knows that the political environment will become more challenging over time,” says Dr. Aaron Belkin, “If repeal doesn’t happen this calendar year, it is unlikely to pass until after the next presidential election.”  Belkin is Director of the Palm Center and Associate Professor of Political Science at the University of California, Santa Barbara.

Christopher Neff, Deputy Executive Director of the Palm Center, believes that Secretary Gates’s letter is a signal from the White House, not just the Pentagon.  “Today’s letter represents a public effort by the Obama Administration to put a stop to Congressional repeal of “don’t ask, don’t tell” in 2010. Clearly, the Department of Defense is not its own branch of government. The Secretary of Defense serves the President.”

GetEQUAL's protest in front of the White House at Lafayette Park is still on for tomorrow, May 2nd at 12:00 noon (EDT).

Read a copy of the full letter, AFTER THE JUMP.